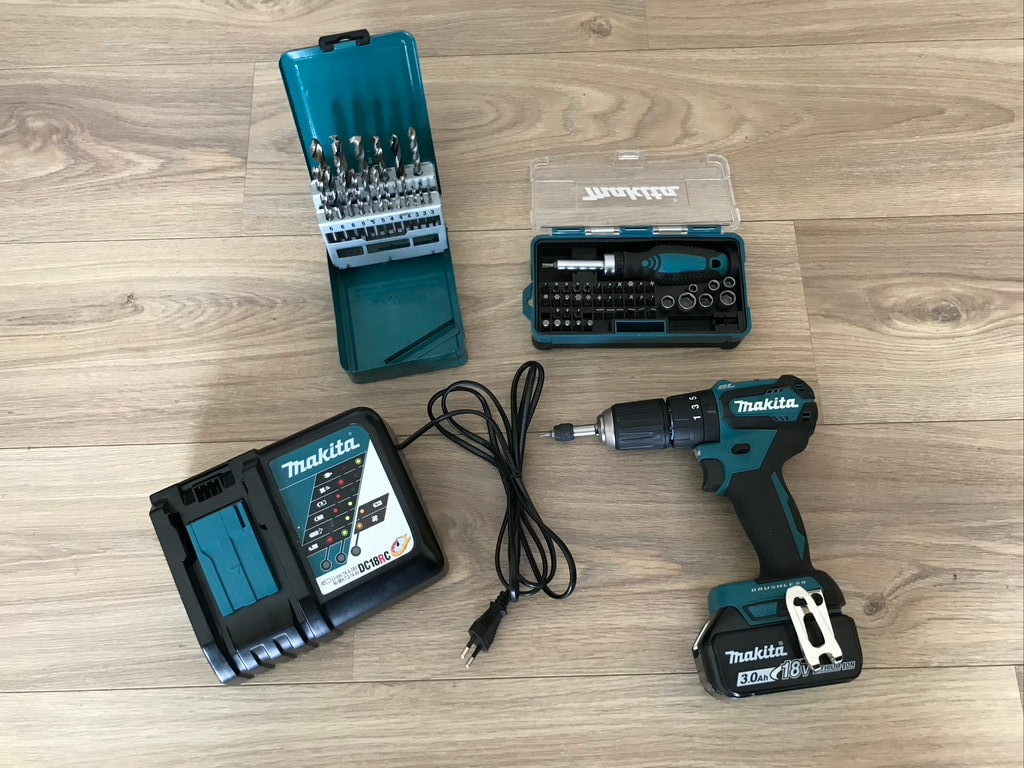 What is the best Makita Drill for doing home projects? The obvious and rather tedious answer is that it will be highly dependent on the type of project. However, in this article, I will recommend a Makita drill that I have found to be capable of handling the most important tasks for DIY projects at home.

For over two years, I’ve used the Makita DHP483 (upgraded version: DHP487 hammer) drill to install and build projects around the house. It is reasonably priced and has some basic functionalities that will be useful for most people working on home projects.

Working as an electrician, the tools I use at home and on the construction site are vastly different. The drills I use at work are obviously far more advanced and far more expensive. However, I do not bring these tools home to do standard home building or maintenance. After experimenting with various drills and brands, I decided to invest in the Makita DHP483 drill. In this article, I’ll share my hands-on experience with this drill from Makita.

I bought the Makita DHP483 drill at the beginning of 2020, and it’s been my go-to tool for home projects since. As previously stated, I use a variety of tools at work for specialized tasks. Professional hammer drills, impact drivers, and other tools are among these. And there’s a reason why the majority of people don’t use these tools. They’re obviously more expensive, and they have far too many advanced options that, for the most part, are not really necessary for home projects.

This drill has been my primary drill of choice for over two years in my personal DIY projects at home. I’ve used the DHP483 in a variety of new installations and maintenance situations. However, because many new construction projects are built with concrete, it is important to note that this Makita Drill cannot drill in concrete. On the job site and in DIY projects involving concrete, I primarily use Milwaukee and Hilti hammer drills (along with a variety of other tools). And they’re great (at work), though, for regular DIY projects, I went with the DHP483 hammer driver-drill.

Also Read: Why do Electricians Use Klein Tools?

Important Note: The DHP483 has since been replaced by the DHP487. The new model has mostly been improved with a more compact and lightweight design with a reduction of 0.3 kilograms.

Upon researching which drill to buy at the time, I came across this Makita drill. To be completely honest, I was also drawn in by the store’s advertised discount. At the time, I had a $200 budget that I was willing to spend on a drill for a home project. The DHP483 met this requirement, and after borrowing this particular model from a coworker, I swiped my credit card to purchase my own.

This hammer driver drill has a multitude of features that I could go into further detail about (user manual). However, the following are some specs that I have found to be the most important – particularly when using a drill specifically for home construction projects.

The DHP483, like many other tool brands, is powered by a multipurpose 18V battery. Of course, the cordless feature allows you to work without having to find a power outlet to power the drill. This is the standard option for most drills, so it is nothing special. However, if you ever need to use another type of power tool, such as a concrete hammer drill, you can easily insert this battery. This 18V battery also has 50% more capacity than previous options.

If your battery runs out, you won’t have to wait forever to get back to work. Makita claims that this system’s technology charges the battery up to three times faster than previous models. In the instances of me running out of battery, I’ve also regularly only waited for about 10 minutes before picking up work again. When charging a Makita battery, you’ll notice that it produces a relatively loud sound when compared to other brands. This is because the charger has a cooling fan, which allows for faster charging while also preventing overheating.

While having three times the battery capacity, the Makita DHP483 hammer driver-drill also has a brushless motor. This only adds to the model’s time and energy efficiency. Brushless motors are increasingly becoming the standard option for many power tools. In a nutshell, a brushless motor is more efficient due to a higher power-to-weight ratio, refined RPM (speed control), and torque. This also has the added benefit of a longer lifetime and less maintenance. The DHP483 is also covered by a 5-year warranty.

4. Hook Attachment For Carrying Around

It’s just one of those features that’s great to have, and annoying to lack. The hook attachment allows you to carry the tool around with you instead of leaving it behind or balancing the drill on uneven surfaces. When working on a ladder, having this feature will come in handy when trying to juggle both screws and plugs while installing the equipment.

Also Read: What ladders do electricians use?

Pro tip: In the absence of a dedicated tool-carrying hook, wrap a zip tie around the handle. The tool can then be hung on a ladder with a hook. This is also an option if you want to get rid of the excess weight.

5. Led Light to Work in the Dark

Ah, so now we’ve come to the smallest but possibly also the most important feature of a drill. I can’t tell you how many times I’ve had to place my smartphone on surfaces when installing electrical equipment due to poor lighting. Having a built-in light is one less thing to worry about. When you operate the DHP483 drill, the LED light turns on and then turns off after 5 seconds. Personally, I’ve used the DHP483 in the evening to perform maintenance on my scooter (Peugeot Kisbee). This feature is a huge relief because you won’t have to bring a headlight or any other type of light with you.

The comfortable grip is one of the features I appreciate most about this Makita Drill. Every time I’m about to start a project at home, I look forward to it primarily because of the drill’s comfortable grip. Overall, it’s been far more comfortable to use than many of the other brands I’ve used at work. In general, I would say that this is one of the primary advantages of working with Makita tools. Other brands may be more expensive, but they do not have the same “feel.”

What Are the Best Drill Brands to Buy for Home Use?

I’ve described my experience with the DHP483 hammer driver drill in this article. You could argue that because I’ve used it for so long, I’ve become accustomed to it. However, I would argue that this Makita cordless drill will be a great option for people who are just doing regular ol’ DIY projects at home. The DHP483 is not the only drill available to the general public. Today, there is an infinite number of tools that will accomplish the same task. It all boils down to your personal preferences and needs.

Also Read: Why Do Electricians Use Milwaukee Tools?

Pro tip: You won’t get the same hands-on experience if you only read blog posts about a specific type of drill. As a result, I recommend going down to the nearest tool shop to get a sense of what is most comfortable to use. As an example, If I were to add a new drill to my collection, I’ve also found the Bosch 12V Drill to be an excellent accessory drill for home projects. I use this drill for a variety of tasks at work and find its lightweight design and 12V battery to be very powerful for a wide range of projects.